Fluoride, the most celebrated tooth decay preventive, is controversial because safety and efficacy studies are questionable.

Even fluoridation proponents admit “The primary adverse effects associated with chronic, excess fluoride intake are enamel and skeletal fluorosis,” according to the  Institute of Medicine; Food and Nutrition Board; Standing Committee on the Scientific Evaluation of Dietary Reference Intakes (1997) Dental fluorosis – white spotted, yellow, brown and/or pitted teeth – now afflicts 65% of US Teens

Harriehausen found  that “using optimally fluoridated water (0.7 ppm) indicated that more infants are likely to exceed Adequate Intake  and Upper Limit (with infants aged two-, four-, and six-months being affected the most), thereby placing infants at great risk for dental fluorosis, which is consistent with other studies.”

The adequate intake of fluoride to avoid moderate enamel fluorosis for infants up to 6-months-old is a mere 0.01 milligram a day – which is the level already in all infant formulas, concentrated, ready-to-feed or organic.

Many dental, health and government groups give advice to avoid routine mixing of infant formula with fluoridated water but fail to adequately inform the public seeming to protect fluoride’s image rather than infants’ teeth.

The CDC described moderate/severe fluorosis as “teeth have larger white spots and, in the rare, severe form, rough, pitted surfaces.” 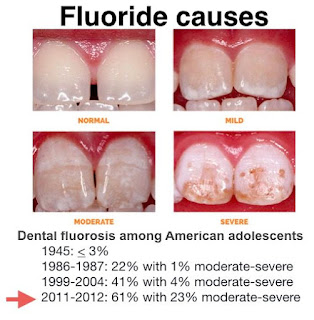 Many other studies support Harriehausen’s conclusions:

Beltran-Aguilar and colleagues found children, even in sub-optimally (less than 0.7 ppm) fluoridated areas, with moderate and severe fluorosed teeth which is characterized by crumbling or pitting teeth that usually decay faster. "This severity was not observed in the 1930s among children drinking water with less than 1.3 ppm fluoride," the authors report.

Levy reported in 2010: “Results suggest that prevalence of mild dental fluorosis could be reduced by avoiding ingestion of large quantities of fluoride from reconstituted powdered concentrate infant formula and fluoridated dentifrice”

Zohoori reported in 2012: “Some infant foods/drinks, when reconstituted with fluoridated water, may result in a F intake in infants above the suggested optimum range (0.05-0.07 mg F/kg body weight) and therefore may put infants at risk of developing dental fluorosis.”

Brothwell in 2003: “Breastfeeding for > 6 months may protect children from developing fluorosis in the permanent incisors.”

Fluoride needs to be put back into doctors’ offices where it can be prescribed based on age, weight, health and need.  Lobbied legislators should never be allowed to prescribe fluoride to babies without informing their parents that fluoride overdose may ruin their babies’ teeth.